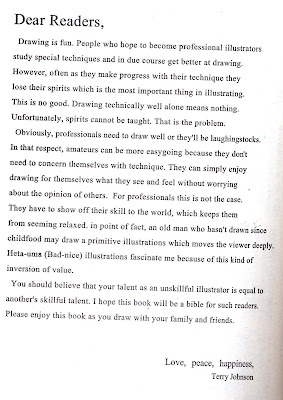 This is the introduction to Bad n Nice by King Terry

UPDATE - I posted some pictures from this over on NETTLESOME (see side bar for link)
Posted by JOHN BROADLEY No comments:

I was surprised, to say the least, to hear that 'Pond Life' has been nominated for an Ignatz Award at SPX (that's Small Press Expo) this weekend in North America.
Surprised because there were only about 25 copies sent over to the US, and I've never really considered it to be a comic as such. My ignorance of the whole comics world is such that I'd never heard of the awards, and am ashamed to say didn't even recognise the Krazy Kat reference until I googled it. It's great to get a bit of recognition and thanks to those responsible for putting it on the list.

Below is from Publishers Weekly's Beat blog:

Small Press Expo (SPX) 2008 will host the twelfth annual presentation of the Ignatz Awards on Saturday night, October 4 at 9PM at the North Bethesda Marriott Hotel and Conference Center. The Ignatz Awards are a celebration of outstanding achievement in comics and cartooning, the nominees being determined by a jury of five comic artists. This year’s jury consisted of Gabrielle Bell, Farel Dalrymple, Eleanor Davis, John Hankiewicz and Andy Hartzell. The Ignatz Awards are voted on by those who attend
this year’s SPX on Saturday, October 4 only.